Without a doubt, the easiest way to pull or replace the engine in a Z31 is with the tranny attached firmly to it. You can probably accomplish this method in about the time it takes just to drop or install the tranny if you were going to do them seperately, plus you don't have to worry about bending an input shaft, or any of the other aggravations associated with bolting the tranny to the engine while from underneath the car. I find that this method works best when the back of the car is raised in the air, so jack up the back, or even better, use ramps. Oh yeah, remove the hood too. Then. . .

There you go, if you can't get it by yourself from here, good luck on the rebuild. All that's left now is just a little coaxing. Enjoy the miracle of birth.
The Engine Project

I'm not gonna be able to go into too much detail here...but at least I can give you some ideas.

My engine was burning lots of oil...not losing oil, burning oil. Here's a few things that happened while I burned oil.

First, it started off slow. I was burning about 1 qt. per oil change. Then I had my head gaskets replaced and it seems something the mechanic did made the problem worse (maybe higher compression ???). Many things can cause oil burning. The foremost is ruined or stuck oil rings on the piston heads. Somehow, oil can get stuck and gunked up on the oil rings. There are two thin chromed oil rings, and in the middle of them there is a serated ring called the oil ring expander. When we took apart my engine, we found that oil had stuck all three of these rings solid and stuck to the groove. When oil rings get stuck, the oil that lubricates the cylinder walls is allowed past the oil rings (since they are not expanding and scraping the oil on the downstokes), past the compression rings (compression rings do not scrape oil...they allow it to go right on through) and into the combustion chambers. Then it burns and leaves as exhaust. Oil burning makes everything dirty. Oil burning ruined my catalytic converter ($150 or so, right) and most likely my 02 sensor. If I had a normal, noise cutting exhaust it would probably have clogged it up a bit, too. It also dirties up the whole exhaust system, spits heavy smoke out the back of the exhaust, and gets your nice chrome tips dirty :) It also stinks for all the people behind you and stinks up your own car when your at a stoplight. My oil burning got progressively worse, until I was burning more than a quart of oil per gas fill up. My gas mileage was down to about 15-16 city, as well. I was throwing $1 of oil into my car about once a week...that's an extra $50-$75 a year while destroying the environment (he he).

Other causes of burn oil can come from a bad head gasket (letting oil through the oil channels on the heads to the combustion chamber, also accompanied by low compression) and from leaking valve seals in the heads. I had my car compression tested and my compression was almost right on specs., even after 147,000 miles.

There are two solutions, one is a chancey one, but can work, and the other is a rebuild. The chancey one, which a trusted mechanic of mine told me, is to take BG44 and many other solutions and drown the engine with it. You actually put it right into the cylinder heads and just let it soak in. You also add a bunch of crap to the oil. Run the car for about 100 miles, then change the oil and do the whole thing over. After about 3 tries and just over $100, you could solve the problem. This has actually worked several times for one of my mechanics.

But, I was also doing upgrades to my car, which involved removing the heads and such, and I had a small front crankseal leak and a decent oil pan gasket leak...so my best interest was to rebuild. I also had some noise coming from what I thought might be the crank, so I figured a full rebuild would inspect any possible culprits and solve some problems. Turns out it was probably a good idea in my case. I had a lot of old oil build up, some worn crank bearings, and the rings were really, really badly clogged. The rings were actually all in very good shape, but the oil rings were just infected with oil build up and old carbon.

I started dismantling my car bit by bit, and I carefully labeled every bolt in their order to ensure they got back in the right place...as I put them back on, I constantly checked my manual for torque specs and instructions. I read the manual procedures several times before attemping any work, so I had it memorized as I put it back together (but I still referred to the manual every step as I was disassembling and reassembling). I got a bit lazy near the end of the dismantling and I have two bolts left over (external engine bolts, not internal :). I don't quite know what I missed, but I wish I had labeled and bagged every single item more carefully). Label all the vacuum hoses, wires, harnesses and more...you'd be amazed how mixed up things could get if you weren't careful.

I was going to participate with a lot of the rebuilding of the lower half of the engine, but Robert Johnson (awesome mechanic, highly recommend to all you Utah folk) and I had a hard time synchronizing our schedules for that to work. I got to help put the oil pickup pipe and O-Ring back on, the pan and pan gasket, and then retorque the heads and put on the timing components. I repainted my block (iron cast grey high-heat ceramic spray paint...clean all oil and residues off before painting), dropped the engine (dropped with Robert's help), and reinstalled everything else necessary. To paint, I masked off the heads a bit and I used a peice of cardboard pushed flush against any straight across areas so I didn't have to mask too much. I actually had to paint the block with everything on it (besides oil pressure sending unit). I even painted the borrowed chain a bit :) 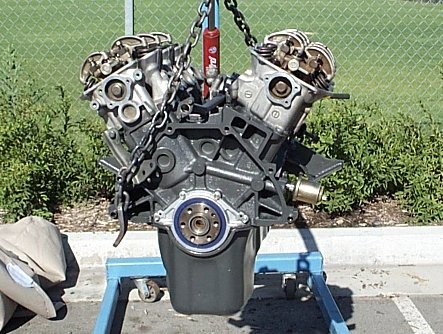 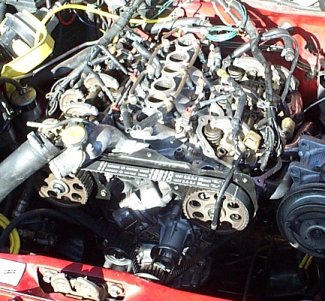 Make sure your mechanic uses plenty of assembly grease on the bearing and other components...this will all wash out with the first oil change. Also make sure clean oil is being used on everything HEAVILY while assembly is done. Use a thin coat of fresh oil on all the heads bolt threads and lifter assembly bolt threads. There are many good reasons for this. The oil coating will give you a true torque on your bolts. If you put them in dry, you can get bad torque readings because of friction and grind. Don't use TOO MUCH oil on the threads, too much will cause unwanted pressure near the bottom of the bolt hole...so just a thin coat on the threads will do. Also, a little oil will help to prevent the bolts from seizing later on. Hey, be careful with the seals...make sure they are all on right...for example, make sure you don't have one looking like this...it ain't worth the trouble: 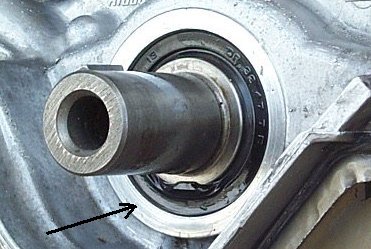 While the engine was out, I cleaned up as much as I could endure. The engine bay is a lot cleaner, and all the intake components are spotless. I got a lot of oil off the firewall and around the steering components (rack, engine mounts, etc).

Other precautionary measure I took include:

Replacing fuel lines on the fuel rail (pain in the butt to remove the OEM clamps and dried out hoses...recall done but the rail didn't appear to have been replaced or even worked on).

Throughly cleaned all engine parts and replaced every untorqued gasket (cleaned all the bolts, too).

I had Robert help me drop the engine back into the car (with an engine hoist, of course)...YOU SHOULD ALWAYS HAVE HELP WITH THIS HEAVY KIND OF STUFF. Be careful and thoughtful. Don't be stupid, as much as you think you are able to do these kind of things on your own. Even with two people dropping the engine took some team work.

After I finally got everything done, I cranked the Z over for about 30 seconds to prime lifters with oil. Then I started it up. It ran like crap for about 2 minutes, and then started to settle down a bit. But it ran very inconsitently. I didn't dare take it for a spin until I asked many many questions about how it was running. The typical symptoms of a first start are bad running, some ticking from the lifters and head compenents, and plenty of smoke. The smoke should only last a while. The heads should tick for only about 20-30 minutes, and the bad running may continue for a bit. When you break in an engine you should drive very carefully. Don't do any RPM in excess of about 4K (if that). For the first 500 miles (at least) you should drive like a Grandma. Change your oil and filter after 100 miles. Be strict about this one. All the assembly grease, left over oil residue from the hottank, and fine honing metal shaving your new rings do on your newly honed cylinders has to come out of your oil ASA you hit 100 miles. After the first oil change, you can change as regular, but I might suggest another early change at about 1K.

When you break in the engine, there is a rule about making sure your rings, etc, sit well. To do so, the first 500 miles you should vary your engine speed at all times. Do not Cruise at one RPM for any time. Robert suggested taking the car on a flat, uncrowded road where you could put the car in third gear and just go from 30-50 several times, slowly but steadily, with no load. This way, you work a range from about 2K to 4K back and forth. Don't go taking off the line as fast as you can and never hit the gas all the way for at least 500 miles. You need to keep it slow and simple. Don't cruise on the freeway either. You may feel like an idiot. You'll be just like those inconsitent crappy drivers you see out there every day...if you feel bad, put a sign on your car that says "I'm breaking in my engine". The sign will also help all the Ricers and such to know that they aren't really beating you on those Green light to Red light sprints :) Don't fall into the temptation of setting one of 'em straight...you can do plenty of that after your careful 500-1000 miles of loving tenderness to your engine.

Good Luck. I will let you know the progress of my engine as it breaks in. I hope to solve all my little problems from exhaust leaks, to high idle, to rough running (here and there), and more.